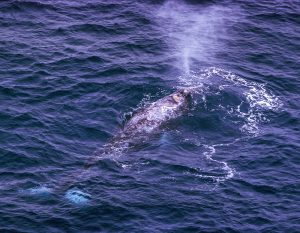 March, April and May are some of the best months to watch for whales migrating north along the Redwood Coast in Humboldt County. California (or eastern Pacific) gray whales make the longest known migration of any mammals, from winter calving in Mexico’s Gulf of California to summer feeding in the Arctic seas. They make the trip north with their calves along the Pacific coast from March to June, and return south from September to January. California’s official state mammals migrate near the shore, feeding off the ocean bottom, and gaining some protection from predators like killer whales. Because of their migration paths, visitors will find good observation spots at some of our Humboldt County beaches in several state and county parks. Visitors who prefer observing from the water can arrange a whale watching charter in Eureka.

For land lubbers, early morning hours, a high spot on the shore overlooking the ocean, and a good pair of binoculars will give you the best chance of sighting the grays. Look for their spouts (sprays of vaporized water) in a cycle of three to five blows when they surface, before they dive for three to six minutes. Gray whales travel in small groups, and in the spring they will be swimming north up the coast at about five miles per hour.

Because the migrating whales come closest to the parts of the Pacific coast that jut out into the ocean the farthest, these locations make the best observation points for whale watching. Some of the best places for whale watching in Humboldt County are to the south of Fortuna, and others are to the north. Closest is Table Bluff in Loleta, just south of Humboldt Bay, and Ferndale’s Centerville Beach County Park’s steep cliffs to the south. Even if you spot no whales, you’re likely to see harbor seals from the cliffs. Farther to the south, the best observation points are Sinkyone Wilderness State Park and Shelter Cove, with its lighthouse.

Less than an hour to the north from The Redwood, try Trinidad Head at Trinidad State Beach, or several good locations in Patrick’s Point State Park – Palmer’s Point or Wedding Rock. Farther to the north, try Dry Lagoon in Humboldt Lagoons State Park, about an hour away. If you are visiting Prairie Creek Redwoods State Park, you might spot some whales at Gold Bluffs Beach.

Although the majority of gray whales migrate the whole way from Baja to the Arctic without stopping, some now feed instead off the coast of the Redwood National and State Parks, with its rich source of food. This means that even summer visitors to these Parks may still spot whales. Although farther from Fortuna, good places to watch in summer months are Klamath River Overlook in Requa, and Crescent Beach Overlook in Crescent City.

After you’ve seen the Avenue of the Giants and our spectacular redwoods, whale watching is just one of the many other great things to do near Fortuna. Our guests enjoy everything from great hiking, biking and horseback riding, to historic towns, museums, seafronts and scenic drives. Best whale viewing in Humboldt County is March through May, and September through December, so go online or give us a call and book a whale of a getaway today.