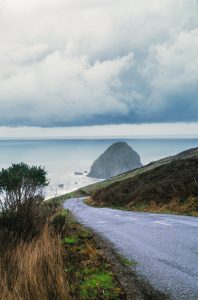 If you enjoy driving adventurous mountain roads to reach spectacular coastline views and native wildflowers at their best, then plan a scenic drive along California’s Lost Coast in the spring. Here, the cool, foggy coastal climate meets that of the interior valleys with its sunny hot summers and rainy winters, creating diverse microclimates. The rugged isolated terrain is California’s only coastal wilderness, free from the kinds of coastal development found in other parts of the state.

Wildflowers are abundant in the spring, especially from March through May, although you can see some species as early as February and as late as September. California Poppies bloom in grassy areas throughout the season, along with Parsnips in moist coastal areas. You’ll find Buttercups and Mission Bells as well until late spring. Beginning in March, Lupine, Salmonberry, Oregon Grape, and Blue Blossom are widespread along coastal areas, and you may see the aptly-named Stonecrop in the rocky crevices of cliffs.*  The Lost Coast also is home to a wide variety of California wildlife, including black bears, black-tailed deer, Roosevelt elk, steelhead, salmon, and more than 250 species of birds.

This scenic Lost Coast drive will take a minimum of four hours round trip, but can easily fill a day with all the things to see, especially if you want to venture as far as Shelter Cove. From your home base at The Redwood Riverwalk Hotel in Fortuna, drive west to Ferndale (plan another day’s sightseeing here), then take the Mattole Road (known as the ‘Wildcat because of the resident bobcats) through Alpine forests toward Petrolia. You’ll reach the shoreline at Cape Mendicino, and follow it for about six miles until the road turns inland toward Petrolia. Petrolia’s name gives you a hint about its history as the site of the first oil well in California.  You’re in earthquake country, too – near the Mendocino Triple Junction, where three fault lines meet (Wikipedia). From Petrolia, continue through the Mattole River Valley to Honeydew, then into the forests of Humboldt Redwoods State Park until you reach US 101 just north of Weott. If you take the 1.1 mile Rockefeller Loop Trail here, you’ll see some of the wildflowers that flourish along streams under the redwood canopy.  You can choose to return to Fortuna via either the highway or the northern portion of the Avenue of the Giants.

Should you want to see more of both the Lost Coast and the redwoods, turn south onto either US 101 or the Avenue of the Giants to Redway, then follow Briceland Thorn Road west toward the small fishing community of Shelter Cove. There you can spend some time tide-pooling at low tide, just walking on Black Sands Beach, or hiking the first short portion of the Lost Coast Trail. Whichever route you choose to take, we will be waiting to welcome you back home to The Redwood at the end of the day. You can soak those tired muscles in our indoor pool, and even have dinner delivered to your room by Western Pizza.

Of course, spring is not the only time to discover the Lost Coast – it’s stunning any time of the year – so don’t hesitate to give us a call or book your stay online, not matter what the season!

Cautionary Notes:  Winter, 2017, has brought heavy rains to the area, so be sure to check current road conditions. Fill your gas tank before you go, since fuel may not be available on the remote parts of this route. Portions of this drive west of Ferndale and west of Honeydew are rough, and the roads can be dangerous, especially in coastal fogs or storms. Weather conditions can change rapidly, and cell phone coverage is limited.